UPDATES Masks Not Required at the Oklahoma Aquarium Read On... 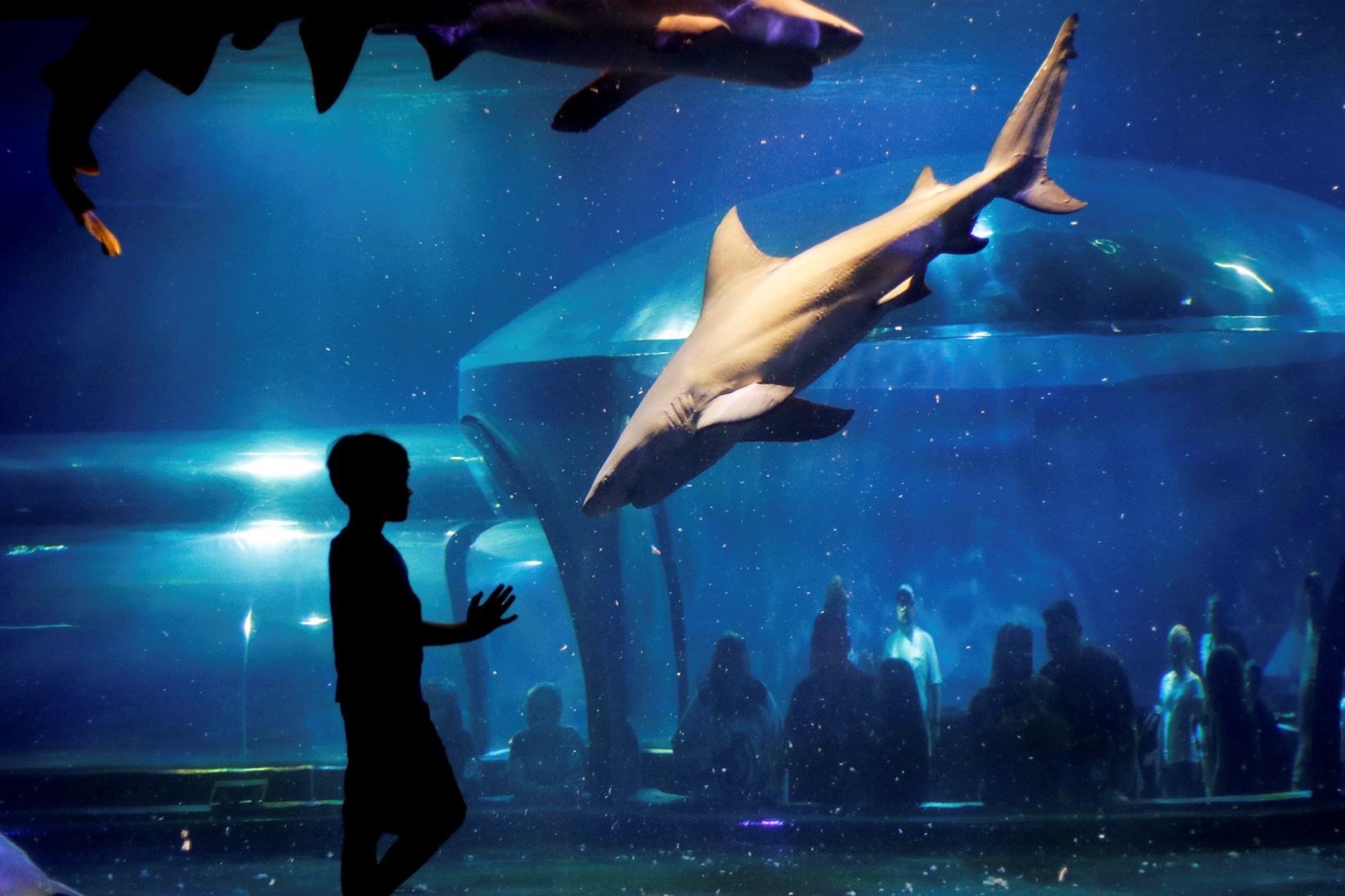 The Oklahoma Aquarium is home to the world’s largest collection of bull sharks. Ten of the “most dangerous sharks known to man” inhabit a 380,000-gallon saltwater tank and tunnel, along with three nurse sharks. This immersive exhibit allows visitors the chance to walk through tunnels beneath and alongside some of the most beautiful and deeply misunderstood creatures in the sea.

The Oklahoma Aquarium’s Shark Adventure is the only exhibit in the entire Western Hemisphere where bull sharks can be seen. Bull sharks are one of the most unique shark species as well as one of the most notorious ocean predators. They are widely regarded as the “the most dangerous” shark in the world because they have the strongest bite force of any shark species and are responsible for a large proportion of shark bites each year.

One of the most common causes of shark bites is simply a consequence of sharks’ natural curiosity. Because sharks have poor eyesight, they tend to rely on other senses like smell and electroreception. Electroreception refers to shark’s ability to sense electric fields, like those created by our nervous systems when we move. Their sixth sense is detected by an organ known as the Ampullae of Lorenzini, a series of jelly-filled sacks located near the nose. If a shark is hunting in shallow or murky waters, as bull sharks often do, they may take an investigatory bite to figure out the source of the scents and electrical fields it senses.

Bull sharks also have a unique adaptation that allows closer contact with people. They are the only shark species that is capable of swimming in fresh water and salt water. Bull sharks utilize their rectal glands to osmoregulate (control the salt content of the blood), so they can swim in water of any salinity. This ability to venture into lakes and rivers, however, places them in popular hangouts for humans. Bull sharks have been sighted as far as 1,500 miles up the Mississippi River and 2,500 up the Amazon River. Though more frequent encounters between sharks and people inevitably increase the risk for bites, there are still fewer shark bites each year. Across all shark species globally, there are less than 100 shark bites per year and less than six are fatal.

Bull sharks prefer to eat foods like bony fish, crustaceans, and other smaller sharks and rays, although they will also eat marine mammals like seals or dolphins. At the Oklahoma Aquarium, our sharks mainly feast on salmon. Each shark eats 1-3% of its body weight during a single feeding, which takes place twice per week. We have both male and female sharks, with each individual weighing approximately 230 pounds.

Each time a shark eats, it loses several teeth. The lost teeth are then replaced by a row of teeth that lies behind the lost row. Therefore, sharks always have sharp teeth to catch and eat their prey. Over the course of a lifetime, an individual shark will lose 20,000 teeth! With 10 bull sharks and three nurse sharks living in one tank, the tank floor is sprinkled with shark teeth. Thankfully we have a dedicated biology staff who regularly scuba dive with our sharks to clean the tank and vacuum the teeth!

Along the bottom of the tank you may notice three sharks. These docile creatures are nurse sharks (Ginglymostoma cirratum), and they often congregate around the pumps along the bottom of the tank to receive fresh, oxygenated water. This clean, oxygen-rich water makes their lives easy because they utilize buccal pumping to breathe. Buccal pumpers use their cheek, or buccal, muscles to pull water into their mouths and over their gills for gas exchange. Breathing this way means they can spend their time relaxing near the sea floor. If nurse sharks were like bull sharks they would need to swim all the time to breathe or else they would actually drown! Swimming forces the water to ram up against a bull shark’s gills for gas exchange; without movement bull sharks and other ram ventilators have no way of forcing water through their gills. 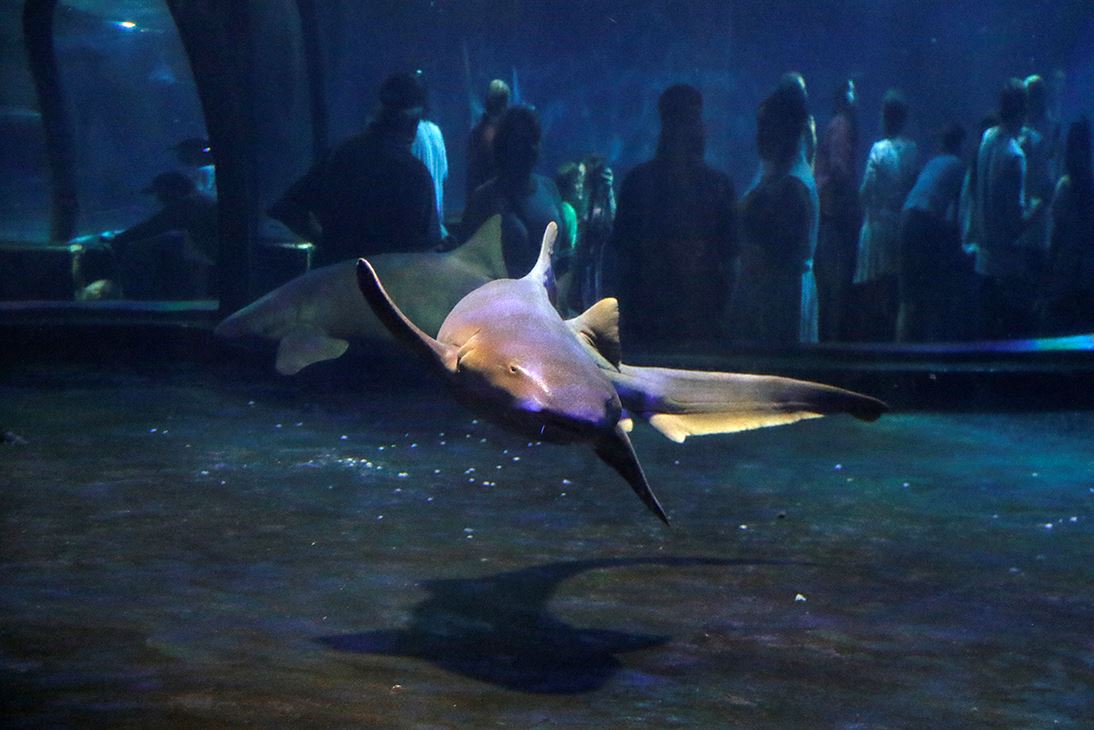 No one really knows where nurse sharks got their name, but some people believe it is because they sound like nursing babies when they suck up their food. Their diet consists of shrimp, squid, and small fish, as well as crunchier prey like mussels, clams, shellfish, and occasionally coral. Rather than having razor-sharp teeth, they simply have strong, crushing jaws.They hunt for their food at night and spend their days piled up in groups, usually in the same spot each day. They live in the eastern Pacific and western Atlantic oceans, where they are a common and harmless sight for scuba divers.

One of the most unfortunate realities about sharks is the threat humans pose on their population sizes. Like many shark species, bull sharks are listed as on the IUCN Red List as “near threatened,” meaning they are approaching a risk for extinction. The reason for an overall decline in shark populations is disproportionately caused by human activity. Habitat modification, bycatch, and overfishing pose the greatest threats to sharks.

Larger species of sharks, like bull sharks, are most commonly exploited for their dorsal fins to make shark fin soup, which is considered a delicacy in some cultures. Despite legal intervention, shark finning continues to plague shark populations because it is extremely lucrative for humans. A single bowl of shark fin soup costs approximately $200. Each year, humans kill more than 100 million sharks for their dorsal fin.

In addition to intentionally fishing sharks, populations are further threatened by sharks’ reputations. While humans kill millions of sharks annually, sharks attack less than than 20 people per year, and fewer than five of those attacks result in fatalities. Few people are aware of this reality because sharks are often sensationalized in the media, and fearing sharks is deeply rooted in social norms. By offering a chance to see and interact with sharks first-hand, the Oklahoma Aquarium hopes to set the record straight when it comes to sharks and the threats they pose. 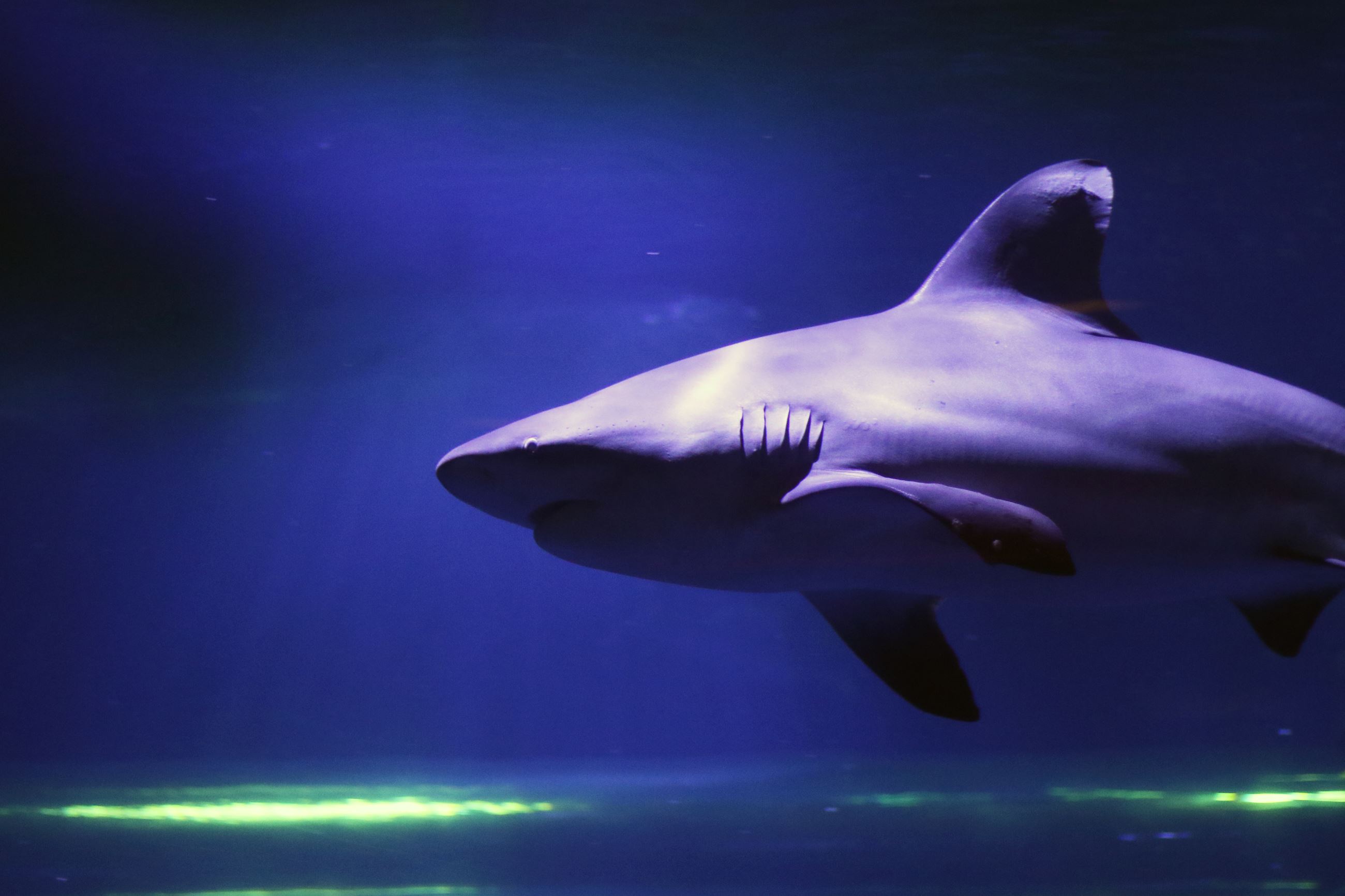 The sharks at the Oklahoma Aquarium also have an impact felt far beyond the state lines. As one of the few aquariums in the world with bull sharks, we had the opportunity to pioneer research with safe and proper care. From transport to husbandry to veterinary medicine, the Oklahoma Aquarium has made groundbreaking discoveries about the ways sharks interact with their stressors in captivity as well as in the wild. Our sharks have also partaken in research that protects thousands of people in coastal communities. Find out more about our research at the Oklahoma Aquarium.

TO ENCOURAGE SOCIAL DISTANCING, ALL FEED SHOWS ARE TEMPORARILY POSTPONED.